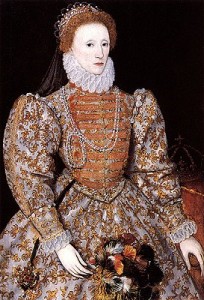 Queen Elizabeth I was the last Queen of England. Since her death in 1603 there has only been a Monarch (king or queen) of the United Kingdom.  Her successor was James Stuart of Scotland who became James I of the United Kingdom. James’s accession meant that the three separate kingdoms of England, Scotland and Ireland were now united, for the first time, under a single monarch.

(*Queen regnant (plural: queens regnant) is a female monarch who reigns in her own right, in contrast to a queen consort, who is the wife of a reigning king.)

A recent email we received asked:

What about Queen Anne?

Ann was the last of the Stewart (Stuart) monarchs. She was Queen of Great Britain and Ireland 1702–14.  England (already joined with Wales) and Scotland formally united into a single state under the Act of Union 1707.

Our Queen today is Queen of the United Kingdom and not just England.  Her official title is

“‘Elizabeth the Second, by the Grace of God of the United Kingdom of Great Britain and Northern Ireland. ”

Her full title is:

“Elizabeth the Second, by the Grace of God, of the United Kingdom of Great Britain and Northern Ireland and of Her other Realms and Territories Queen, Head of the Commonwealth, Defender of the Faith.”.

Timeline of Kings and Queens

← Will Prince William’s wife become a Queen?
When should we use the word British? →

1 comment for “Who was the last Queen of England?”